This entry was posted on September 9, 2018 by John Cappa. 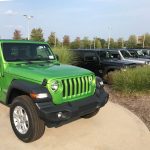 When the 2007 Jeep JK two-door Wrangler and four-door Wrangler Unlimited were introduced, Dynatrac immediately recognized that the new vehicle would fill a niche between the outgoing TJ Wrangler model and the wildly popular, but discontinued (and sorely missed) XJ Cherokee model. But the JK intrigue actually attracted more than just off-road enthusiasts and diehard Jeep owners – a whole new breed of customers to the Jeep brand and the aftermarket parts industry helped increase the sales volume of the Jeep Wrangler to nearly that of mainstream cars. In fact, FCA has sold approximately four times as many Wranglers each year as it has Chrysler 300s, and Wrangler annual sales have been roughly equal to that of the Chevrolet Malibu.*

In 2012, JK sales really began to hit full stride. This was thanks in part to the introduction of a refreshed and more refined interior and the introduction of the 3.6L Pentastar V-6 engine, which boasted 85 more horsepower than the outgoing 3.8L V-6. The 2012 JK’s annual sales boosted to about 141,000 units. By 2015, JK sales peaked at nearly 203,000 units. In the U.S. alone, more than 1.5 million Jeep Wrangler JK models rolled off dealer lots between 2007 and 2017. Of course, the Wrangler never hit the same production numbers as something like the Toyota Camry, which nailed average sales of about 390,000 units per year over the last decade.

But the point is, the Wrangler has closed in on sales leaders in the passenger car market, and has even surpassed quite a few nameplates, putting the Jeep well into mainstream car territory. The Wrangler is no longer considered a weekend-only vehicle. Its comfortable interior packages, smoother riding suspension, better handling and increased seating and storage, especially on the four-door Unlimited models, have made the JK Wrangler a more viable daily driver for the masses, who also want a weekend warrior. And that only improves with the new 2018 JL. a Wrangler that meets the needs of the general consumer better than any of the earlier Wrangler or CJ models.

Even though most new Jeeps never roll their tires through the dirt in four-wheel drive, there are still many freshly minted Jeep consumers now being introduced to the off-roading and outdoor world. And the increased popularity of the Wrangler – as well as the adventurous and off-road lifestyle being promoted by Jeep – creates greater demand for more innovative aftermarket products. Interesting fact: Second and third owners of used JK Wranglers are more likely to modify their Jeeps than original owners.

Ultimately, the JK Wrangler is arguably the most modified vehicle in history, a title that the Toyota Camry will never achieve. Dynatrac continues to offer an abundance of aftermarket products to help strengthen and adapt every model of Wrangler to meet your specific needs. And we’ve already launched several products to give Jeep Wrangler JL owners the Confidence to Explore®.